47 hours of recordings, 59 MP3 files of around 45 minutes on DVD. Recorded in Bill’s home town of Stanley, Tasmania in 1983 and includes a 38 page PDF file of course notes. 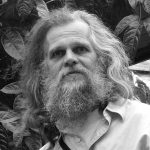 “In September of 1983 I had a rare opportunity to spend two weeks at a Permaculture Design Course by Bill Mollison. It occurred to me that not everyone had such an opportunity. In an attempt to make th at course available to everyone I took professional recording equipment with me. Much editing later, I present the enthusiast with an audio set which marks a point in history. A time before Permaculture has become a household word.” – Jeff Nugent, editor and author of Permaculture Plants

“I have owned a set of these recordings for many years. It is a recording of the design course which I actually attended in 1983. They capture Bill in classic form – full of energy, enthusiasm, and passion. As a Permaculture teacher, designer and consultant, working on numerous projects around the world, I have found them to be an invaluable and endless source of reference information and inspiration.” – Geoff Lawton, Managing Director of The Permaculture Research Institute

Download the first of 59 files in the set. It has been compressed (from 46MB) for faster download, so compared to the set on DVD, the sound quality is poor. Remind yourself when listening to this track that it was recorded in 1983.  Download here (5.75Mb – 47:54 mins).

This mp3 DVD can be played on most computers and most modern DVD players. Some cars are equipped with DVD players capable of playing it. The files can also be loaded to mp3 players for portable listening. The PDF format notes can be viewed on a computer or printed out for easy reference.

Bill Mollison has inspired countless people to take action. He is a recipient of the “Right Livelihood Award,” a prestigious honour that is often nicknamed the “Alternative Nobel Prize.” He was also named one of the “Senior Australians of 2010,” and has received honours and accolades from many places he has visited worldwide.